Glass kills birds—that’s not news. Decades of research by ornithologist Daniel Klem estimates up to a billion avian mortalities from North American buildings each year, a number that experts say is widely shared and recognized. But despite its scope, moves to solve the problem have been comparably small and slow.

Perhaps the best-known causes of window strikes are skyscrapers and other large urban buildings encased in glass, which birds don’t perceive as solid objects. For years, conservation groups have approached this problem on the local level, lobbying cities and towns, or even individual building owners, to change their ways. For example, since 2011, Golden Gate Audubon Society has successfully advocated San Francisco, Oakland, and Richmond to write bird-safe-building guidelines into their permit rules.

This piecemeal approach works and is vital, but it also takes a lot of time and effort to convince individual building owners or local politicians to implement solutions. What has been needed to help make sweeping changes and hopefully inspire other states and cities to follow suit is federal legislation. Now, that could finally be happening.

Last week, Sen. Cory Booker (D-NJ) introduced a bird-safe-buildings bill in the Senate that would mandate all new federal renovations or construction to make at least 60 or 90 percent of their surfaces non-glass (except on historic landmarks). Any glass that is used would have to be fritted, screened, shaded, or UV-reflective, qualities proven to reduce bird collisions. Other conditions include shielding outdoor lights and regularly surveying for stunned or dead birds. “Birds play a key role in North American ecosystems,” Booker says, “[yet] a surprisingly high number are harmed each year because they collide with buildings. Fortunately, with a little bit of design foresight, many of these strikes can be prevented.”

The House counterpart to the Federal Bird Safe Building Act was drawn up by Rep. Mike Quigley (D-IL) in 2015, and was reintroduced this past May. If the bills make it through both chambers of Congress, federal buildings could provide a model for states and cities to develop their own bird-safe legislation, says Erik Schneider, Audubon’s policy analyst who’s been working with Quigley and Booker. The bills aren’t done deals—they still have to survive various committees and may ultimately be attached to a larger bipartisan package. But the sooner they pass, “the less we’ll need emergency-room measures to save bird populations,” Schneider says.

It’s a necessary—and potentially huge—step for helping birds navigate our human landscapes. But even if the law passes and has a cascading effect, it won’t apply to low-lying structures, which, as it turns out, are responsible for the most bird deaths.

Glass strikes have multiple causes that require a bevy of remedies. “It seems like bird-window collisions are very straightforward,” says Stephen Hager, a biologist at Augustana College who studies the problem, “but they’re just as complex as any ecological problem.”

Hager recently published a study in Biological Conservation confirming that rural low rises are more fatal than urban skyscrapers because they tend to sit right where birds are foraging. By surveying 40 college campuses across the continent, scientists discovered that sites flush with shrubs and trees in a 160-foot radius ranked the deadliest. This was true in both the secluded setting of Rock Island, Illinois, where Hager picked up a variety of warblers, and the bustling environment of the National Autonomous University of Mexico in Mexico City, where PhD student Aura Libertad collected Ruby-throated Hummingbird carcasses.

During fall migration, birds will drop into scattered patches of habitat to rest and feed. This, in turn, puts them at risk of colliding with nearby buildings that are four stories or shorter. In Libertad’s case, her university is in a major city, but it holds a 600-acre ecological preserve. Having glass buildings in this important natural spot is an example of poor urban planning, she says—one that can be better informed by existing information and emerging research. She’s looking to “invite more investigation on the issue,” first by Mexican scientists, and eventually the government.

Attractive landscapes, however, aren't the only draw for migrating birds: The study also found that light invites overnight guests to rural locales. It’s what Hager calls “the large-scale beacon effect.” Most birds stick to undeveloped migration routes, he says, so any lit-up towns and office parks they come across have a greater chance of distracting them. What’s more, there could be an innate behavioral difference among urban and rural populations, Hager says. With city birds regularly encountering glass, often from an early age, it’s possible that they learn to avoid windows and other structures after surviving a few crashes. Rural birds, on the other hand, don’t have that training and so are more vulnerable.

For concerned homeowners who have a bounty of habitat on their properties, there’s no one-size-fits-all fix among the many do-it-yourself or certified market-based options. Peter Saenger, president of the Lehigh Valley Audubon Society, has been testing industry-quality glass and deterrents with Muhlenberg College for the past decade—and even he balked at the thought of replacing the glass on his house. But after counting a hundred or so strikes at his bay windows over the course of a year, he decided to hang Acopian Birdsavers from them. The delicate curtains, he noticed, were obtrusive enough to deter avians, but subtle enough to not be an eyesore. Now, he’s teaching the public about the science and remedies of window collisions through presentations with his chapter and a new field seminar for college students.

Meanwhile, in Boise, Idaho, the Golden Eagle Audubon Society’s “Stop the Thunk” campaign aims to coax local residents to update their homes. For a small city of about 200,000, its reach may seem limited. But as Hager’s work shows, for a sprawling city of 82 square miles (nearly four times the size of Manhattan), edged by rural expanses, rivers, and a greenbelt, it’s exactly the kind of place that can have a major impact for migrating birds.

But whether it’s a new U.S. courthouse or the beloved neighborhood library, any bird-safe building is a breakthrough of sorts. Movements are built on cultural shifts. This one, at long last, is starting to see serious progress. 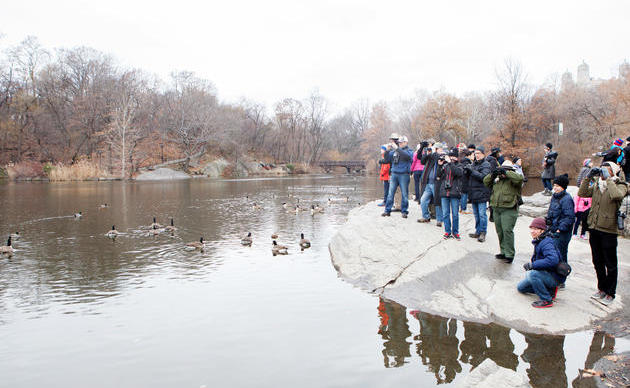